When you've pressed "Play Now" to matchmake against a random opponent, or when you have challenged a Steam friend - you will arrive in the "Select World" screen.

It's recommended that you analyze the world in the "Select World" screen as provides a good overview. There are four key aspects of the world to take into account: 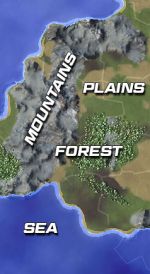 Land units can move at maximum speed across plains but it offers no coverage or protection. The differences between grasslands and desert is purely visual and does not affect gameplay in any way.

Forests offer the best concealment for your units and structures. Riflemen (Infantry and Commandos) get a firepower bonus in forest-combat. All units travelling through forests move significantly slower, especially in mountainous terrain in territories that you do not control. Keep in mind, it also takes 50% longer time to build structures in forests. Takeaway: Use forests to hide units and structures.

Mountains also hide your units, but not as effectively as forests do. All units get an armor (“survivability”) bonus in mountain-combat. For a Defending unit, this armor bonus will be substantial. Mountain-travel is very slow: Only 50% of normal speed. Keep in mind, it also takes 50% longer time to build structures in mountains. Takeaway: Mountain defenders are very strong!

Only sea and air units can travel across sea and those units require energy to move.

All Tanks, Sea- and Air units require energy to move. Energy gets produced at Refineries, which in turn must be built on top of energy wells. Energy wells exist both on land and at sea, but the sea wells require you to first have ships conquer the territory in which they reside.

If your strategy or playing style relies heavily on energy-consuming units, having enough energy production is vital. 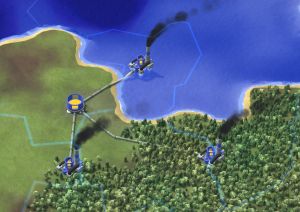 You can construct refineries on energy wells in territories that you have conquered. Once constructed, a Refinery produces 24 energy units / minute and it can store up to 30 units of energy. It is often beneficial to connect refineries to depots that can store more energy.

Here you build Towns. The Town is a moderately risky investment.

You can only build a Town on a Town- or a City Site. Towns generate 45 capital per minute which is equivalent to controlling 3.75 territories.

Most worlds have at least 1 or 2 city site clusters. Here, you can build periphery Industries, which are the smallest, least expensive, least risky investments. They come in 3 different visual flavors (lumber mill, mine, farm) but are otherwise exactly the same.

A Town can also be built at the city site. Once a Town and all 3 connected Industries have been completed, the Town can be upgraded to a City. This is the most expensive and risky investment.

Takeaway: The founding of cities is a risky investment. However, on maps with great seas and fewer territories, the extra economy can give you a significant economic advantage. 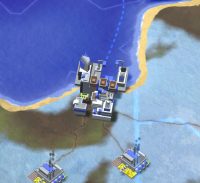 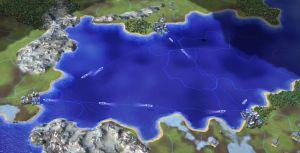