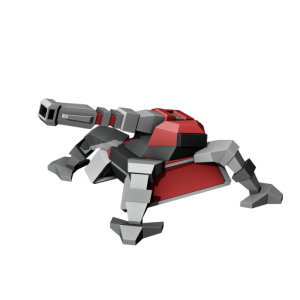 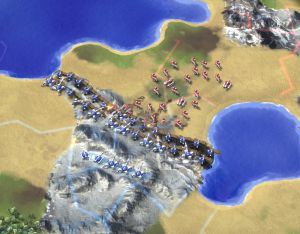 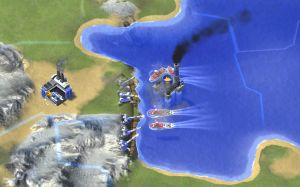 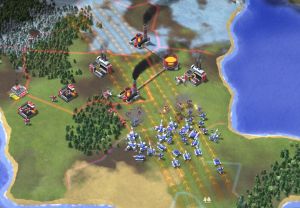 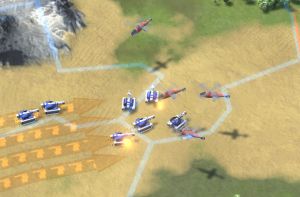 The artillery unit moves slowly and it needs to deploy before it can fire grenades. It is sharing the firing range with that of the Cruiser as it can engage land and surface targets up to 5 unit distances away.

Artillery units are vulnerable in small numbers, but in a group, they can incur a lot of damage both defensively and offensively given enough time to deploy. Once they have deployed, they can in unison fire at oncoming enemy units that may not even reach the artillery before they have the ability to return fire. When artillery units are deployed in the mountain terrain, especially in self-controlled a territory, oncoming units will find it very difficult to approach.

Because artillery is expensive and slow compared to infantry, they are not very suitable for territory conquering even if they do have that capability.

Artillery deployed on a defense line command, especially in mountain terrain deals a lot of damage to oncoming units. The relatively long distance that artillery can fire compared to other land units leads to them adding plenty of concentrated damage in unison against oncoming units. Remember that artillery, like all other land units except tanks, take fatigue damage when they entrench on a defense line.

The long reach of artillery makes them also suitable for coastal defense. Deploy artillery units as close to the coast as possible, mountain terrain for added defensive and attack bonuses, to protect valuable structures or in narrow inlets.

The artillery is often very successful in offensive attacks. If outnumbering the opponent, the artillery can focus their fire and destroy buildings and scarcely attacking land units of any type.

If your enemy players with a lot of artillery, which is a common strategy, especially for newer players, there are a few options:

Helicopters easily take out artillery units if they are left unprotected without SAM or Interceptors. You may want to try to build helicopters, possibly in secrecy, so you can attack oncoming artillery units that are far from their factories. Your opponent may likely switch to SAM production as soon as your helicopters appear, so consider building several helicopters before revealing that you have them. Do not wait until the artillery clusters have reached your base before countering the artillery as it would be too late by then.

Strikers and Bombers can also deal with artillery units. The same concerns apply as with helicopters that your opponent's artillery will soon be accompanied by SAM as soon as you have revealed your aircraft.

Tanks may be effective against artillery but only if you have enough tanks, or if you combine the tanks with infantry or other land units so the enemy artillery does not exclusively fire at your tanks as they approach. Attack artillery on flanks when possible, that reduces the number of artillery units that can fire at your tanks compared to a head-on confrontation.

Infantry in large numbers can surround and eliminate artillery. The infantry units are cheap and expendable and they can be produced at a rate that may be sufficient to repeatedly produce new infantry units to draw fire as other land units attack the enemy artillery.

A Rocket may be fired straight into a cluster of moving artillery, or defense lines full of artillery. The rocket may eliminate a large number of artillery as they often move in "blobs".